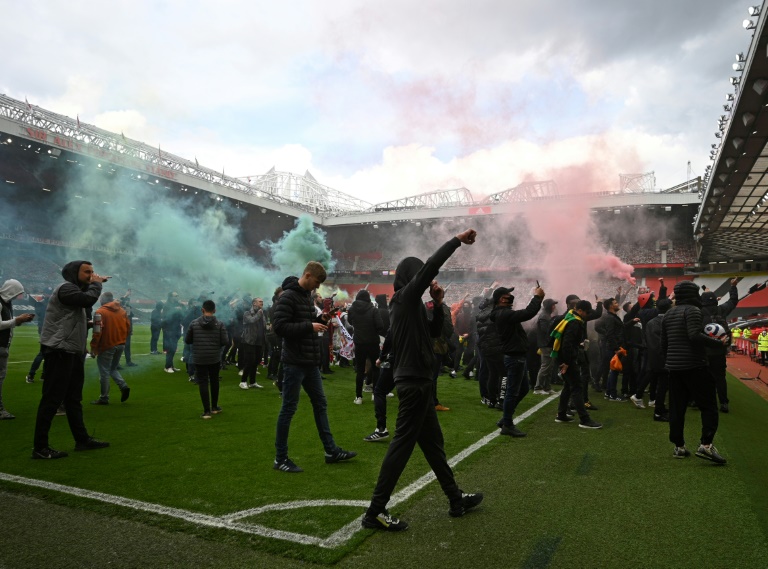 Hundreds of United supporters gathered outside Old Trafford hours before the scheduled 1530 GMT kick-off to show their disgust at the club’s United States-based owners.

Around 200 forced their way into the stadium by battling past stewards and safety barrier.

They ran onto the pitch, let off flares, damaged sections of the pitch and waved anti-Glazer banners.

The ugly scenes were eventually quelled inside the stadium, but riot police, with some on horses, were needed to push the hostile crowds away from Old Trafford after bottles and other missiles were thrown.

The Glazers were already disliked after presiding over a decline in United’s fortunes in recent years after their controversial takeover in 2005.

It was their leading role in the recent failed European Super League plot that reignited United fans’ fury.

Neville, an outspoken critic of the Glazers and the Super League, was quick to support the protesters for taking a stand.

“The reason why those fans came today is because they have had enough,” Neville told Sky Sports.

“I think it’s a warning to the owners of the football club that the fans aren’t going to accept what they have done.

“If there has been disturbance then I don’t think that’s acceptable. But the reality is the game has been called off and the fans have spoken.

“It’s not going to go away because they don’t trust the owners of the club and they don’t like them. They think they should leave.

“Ultimately the ball is in the owners court on what they do next. The fans have been powerful. They have stood up for what’s right.”

Neville’s former Manchester United captain Roy Keane believes the protesters are so tired of the Glazers that they are sure to cause more problems in the future.

“United fans have had enough. They’re doing this because they love the club. It’s not just the last few weeks and the Super League, it’s been building for years. They’ve thought enough is enough,” said.

“This has been the build-up of the last few years. The leadership of the club hasn’t been good enough.

“When they look at the owners they think it’s all about making money. I believe the United fans are doing this because they love the cub.

“People might not agree but sometimes you have to put a marker down for people to notice. This will go all over the world. Hopefully the owners see the fans are deadly serious.

“There’s more to come, this is just the start from Man Utd fans, I guarantee you.”

There was a mood of celebration among fans outside Old Trafford when the game was postponed and former Liverpool defender Jamie Carragher refused to condemn the protests.

“Do we want fans storming stadiums left right and centre and getting games called off? No we don’t,” he said.

“But I’m not going to sit here and criticise Man Utd fans. I think it’s a good thing, protesting not being happy at what’s happened at the club.”